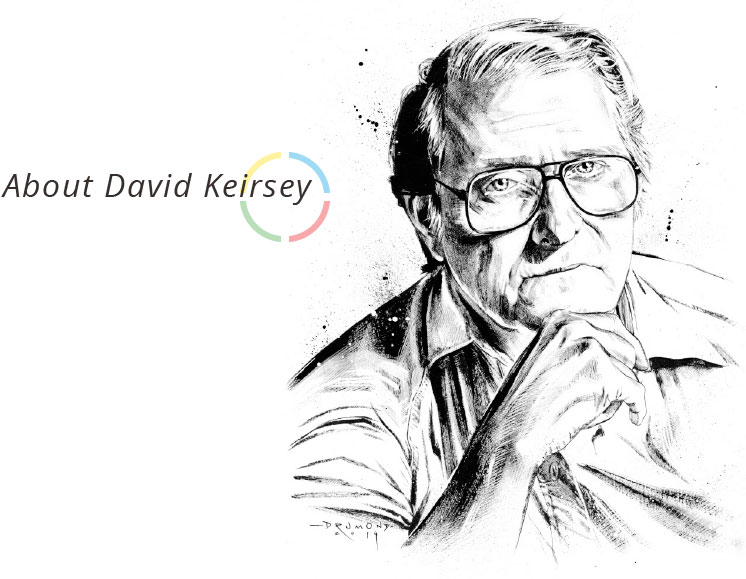 The roots of Keirsey Temperament Theory™ are based in many years of research and innovation. The story began in the 1940's during David Keirsey's World War II service as a U.S. Marine fighter pilot serving in the Pacific. The one book Keirsey carried with him through his entire war service was a psychology book; this book was the first spark of his journey into the field of personality.

At Pomona College and the Claremont Graduate School Keirsey began his research and study of human behavior. As he researched historical literature in psychology, philosophy, and the sciences, he became intrigued by the patterns of four temperaments. These four distinct patterns of human behavior were woven throughout history, dating back to such figures as Hippocrates (c370), Plato (c340) and Aristotle (c325).

In the 1950's, he began putting his theory into practice as an Educational Psychologist, where he developed techniques in training and coaching. For more than two decades, he served as a consultant to both educators and psychologists, with continued research and innovations in his theory of the four temperaments.

In the early 1970's Keirsey introduced his theory as an educational curriculum at California State University, Fullerton, where he served on the faculty, and eventually chair, in the department of counseling for ten years. During his time there, he published his theory in the book, Please Understand Me® (1978), where he publicly introduced the Keirsey Temperament Sorter® (KTS®) to the world.

The Keirsey™ brand presently extends to more than 170 countries in more than 20 different languages. More than 40 million people have taken the Keirsey Temperament Sorter since its introduction 30 years ago. Keirsey Temperament Theory is utilized throughout the world by leading organizations for team building, employee and executive development, conflict resolution, academic counseling, and career planning, among other uses. Keirsey Solutions are used by the U.S. government and military, the world's finest academic institutions, two thirds of the Fortune 500, prestigious global consulting firms, and innovative social enterprises and faith based organizations. Through professional resources, training, consulting, coaching, and social networks on the world wide web, Keirsey innovation is helping people make a difference throughout the world.

The impact of Keirsey Temperament Theory has been lasting and substantial. In the early years, his theory was first put to use by psychologists, educators, and faith based organizations. Please Understand Me became an international best seller, selling more than 2 million copies.